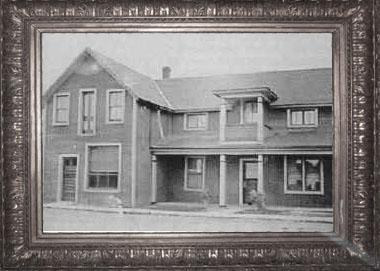 The original building was constructed in 1881, and was home to the first Methodist religious services in Elmvale. It did not become a funeral home until Abraham C. Bishop bought the building in 1919 for $350.00. Although Mr. Bishop's primary occupation was as an undertaker, he also ran a hardware business out the the building. Abraham also was a carriage builder and built carriages and buggies to sell. The custom at this time was to have the funeral at the home of the deceased.

Mr. William P Hutchinson purchased the business on November 18, 1952. He made an "astonishing" change at the time by starting to have the funerals in the funeral home.

Mr. Henry James Lynn took over the funeral home on September 27, 1956. Mr. Lynn increased the size of the building by building an addition which became the visitation room. Mike Stone started working for Mr. Lynn as a licensed mortician in December 1971. Mr. Stone became a full partner in 1987.

In 1990, Mike Stone purchased the land just across the street from their original location and built a new, state of the art funeral establishment.

The new funeral home can facilitate up to four separate visitations at one time and is able to seat 200 people for a service in the chapel. The new facility has a spacious lounge and reception area.