Sherry Terese Haley of Sydney Mines, Cape Breton, Nova Scotia died peacefully early Sunday, March 26, 2017, at Sara Vista nursing home in Elmvale, Ontario. She was born on March 14, 1937, in Sydney Mines, Nova Scotia.  She was predeceased by her parents Edith (Mama) and John (Papa) Fraser, and her beloved husband James (Sonny) Riley Haley. She is survived by her daughter and spouse; Mary Gregorio (nee Haley), George Gregorio, and three loving grandchildren, Jennifer Frias (nee Gregorio) married to Liberto Frias, Christine Gregorio and Bryan Gregorio; she will be deeply missed by her three great grandchildren Danielle and Jesse Frias, Owen Amaral and soon to be forth great granddaughter.  Sherry was the eldest of eleven siblings often helping to care for her younger brothers and sisters. In the late 60’s Sherry moved to Toronto with her beloved husband to start a new life making Toronto her new home and where she raised her daughter. Sherry found employment at Eaton’s as a secretary and continued on her secretarial career for many years until her retirement from the Immigration and Refugee Board of Canada where she had many fond experiences/memories with the First Nations people. Sherry was a wealth of knowledge and an avid reader, historical novels being her favourite.  She was very creative and always had a project on the go. She loved to bake and we will miss her chocky rocks and lemon meringue pies; family parties will never be the same without her sweets and sunny disposition.  Sherry was a strong and independent woman who loved downtown Toronto, she loved to explore Kensington Market and Chinatown.  Sherry loved to take her granddaughters with her on her excursions and taught them so much about Toronto and its diversity. Everyone who knew Sherry would say she was a very sweet woman with a bright spirit, a big heart, a great storyteller and always there for a good laugh.  In the final years of her life Sherry had to give up her independence and move in with her daughter and son-in-law as dementia took control of her. The horrible disease brought her down and it was very sad to watch this bright spirit of a woman have so much sadness and frustration. She tried her best to be herself but struggled daily until she had to move into the nursing home.  The nurses and staff at Sara Vista nursing are to be commended for their exceptional caregiving during the past year.  They treated Sherry as one of their own family members and were overwhelmed with emotion claiming Sherry as their “shining star”.  We will all miss Sherry very much but we know she is in a better place with no more suffering.

Friends may call at the Lynn-Stone Funeral Home from 5 pm - 7 pm on Wednesday, March 29.  Funeral Service in the chapel at 7 pm.

In lieu of flowers, memorial donations to the Alzhemiers Society would be appreciated. 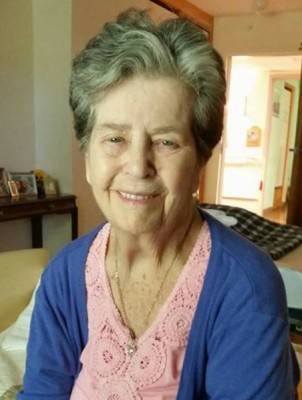