Passed away peacefully at Woods Park Care Centre, Barrie, on Friday, August 4, 2017 in his 92nd year. Dear husband Irene Mayers, who predeceased him. Much loved father of Trent Mayers (Susan Carr) of Barrie and Daryl Mayers (Kimberley Stefaniuk) of Toronto. Bruce will be lovingly remembered by his brothers and sister Noel, Kenny, and Olive of Northern Ireland. He was predeceased by his siblings Tommy, Alicia, Jack, Violet, and Emma.  He will be missed by many nieces, nephews, as well as brothers and sisters-in-law.

Bruce was born to John James and Maud Mayers (nee McKenzie,) who owned a store and a farm, in Ballydoolagh, County Fermanagh, Northern Ireland.  He grew up shaped by the events of the Great Depression and the Second World War.  In 1950, he and Irene boarded the RMS Samaria bound for Quebec City in Canada. From there they travelled by train to their first home in Ingersoll, sponsored as immigrants by Bruce’s much loved Uncle and Aunt, Sam and Violet Wadsworth.  Bruce and Irene first worked for Ingersoll Cheese Factory.  From there they moved to Woodstock, when Bruce became Foreman/Director for the Oxford Dairy, and Irene worked raising her 2 young boys.  However, the desire to own a store was part of his heritage and, in 1965, Bruce and Irene realized the dream of owning a business.  They moved to Cookstown where they owned and operated Mayers’ Lucky Dollar for 20 years, which was a typical village grocery and hardware store.  Finally, they built a retirement home in Orr Lake and moved there to enjoy a well deserved retirement in 1984. Bruce loved to travel and when retired they visited Ireland, Scotland, Australia, New Zealand, the Middle East, North Africa, Europe, and all over the U.S. and Canada. He also loved to garden as witnessed by the flower and vegetable gardens he tended at his home in Orr Lake.

Bruce’s family would especially like to thank the staff and volunteers at Woods Park Care Centre for making the last few years enjoyable.

Friends may call at the Lynn-Stone Funeral Home, Elmvale, on Thursday, August 10th from 3-5 pm & 7-9 pm and on Friday, August 11 from 1:00 pm until time of the funeral service at 2:00 pm; reception to follow at St. John’s United Church, Elmvale.

If lieu of flowers, memorial donations to the Canadian Cancer Society or a charity of your choice would be appreciated by the family. 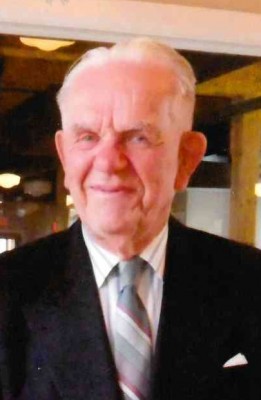