Passed away peacefully with his family by his side at the Sara Vista Nursing Home on Saturday, March 17, 2018.  Frank Orr of Wasaga Beach in his 78th year.  Beloved husband of Louise Orr (nee Gardiner).  Dear father of Kelly, Collin, Cindy and his loving pet Lucy.  Frank will be dearly missed by his 7 grandchildren, Christine, Cody, Brooke, Kurt, Colin, Frankie, Damien, and his 2 great-grandchildren, Ciara and Emily.  Brother of Agnes Breen of Ireland, Jerry Orr of Ireland, Kathleen Donnelly of Ireland, Christopher Orr of Canada, Margaret Diamond of Canada, Bridget McKenna of Ireland, Betty O'Neil of Ireland, Kevin Orr of Canada, Doreen Bradley of Ireland, and the late Mary Bradley (2009), Sean Orr (2002), and Brian Orr (2013).  Frank will be fondly remembered by all his many nieces and nephews and great nieces and great nephews.

Visitation will be held at the Lynn-Stone Funeral Home, 15 Yonge St S, Elmvale from 1-2 pm on Thursday, March 22.

Funeral Service in the funeral home chapel at 2 pm.

Memorial donations to the Alzhemier's Society would be appreciated by the family. 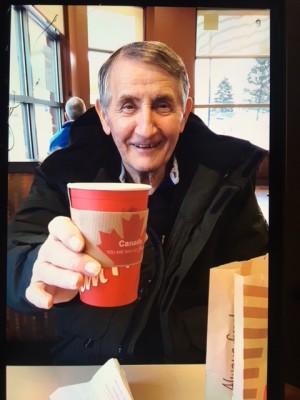