H.C. (Sam) McGee of Elmvale passed away peacefully, after a short hospital stay, on December 1, 2020; he was 82. Survived by wife Elaine (McGhee) who was by his side for more than sixty years. Together they raised a family built with love and made a positive impact everywhere they lived. Born in Flesherton, Ontario he started work with Bell Canada at age 17 and that led to a successful career in middle management with moves to Belleville, Ottawa, Thunder Bay, Sudbury and Barrie; he retired in 1992. He nurtured relationships and developed friendships that lasted decades. He enjoyed playing baseball, hockey, downhill and cross-country skiing as well as curling. Time at “Camp” on McQuaby Lake built with the help of many friends, was a special summer retreat with family and the many friends that lived in the area. It is legacy representing his generosity, hard work and skill.

He felt blessed by his five children Lorie (Brian), Ruth (Brent), Kristal (Arunas), Mark (Peggy), Jim (Fiona) and his eleven grandchildren Gord (Emily), Jenna (Pat), Paige (Andrew), Brittany, Kaitlin, Audrey, Sander, Sydney, Connor, Harris, Gregor. Also left to mourn are his brother Tom (Joan) and sister Jean (Carl). Predeceased by his parents Howard and Ethel and his brother Dave. He was a faithful servant and we know he is with God.

Due to COVID-19 restrictions, funeral service will be family only. 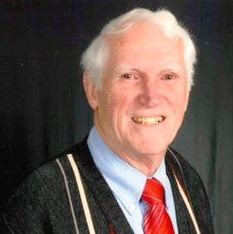