December 28, 1937 - August 14, 2015 it is with heartfelt sorrow that we inform you that Dennis, in his 78th year with family by his side passed away at Hospice Simcoe on August 14, 2015 after succumbing to a brain injury.  Dennis was born in Montreal, Quebec, after a dedicated career as a corporate Credit Manager he and his beloved wife and best friend Gerry (Geraldine Shea) retired to Hillsdale in 1999 to pursue in earnest their favorite past times of downhill skiing, camping and canoeing.  Dennis was predeceased by his parents Thomas and Florence (McDonald), and his brother Kenneth Clune.  He is survived and will be missed by family and friends especially his wife Geraldine (Shea), daughter Nancy (Scott), sons Douglas (Tammy), Kenneth (Louise), Neil (Mona), Tony (Michelle), brothers Donald (sister in-law Jackie, St. Lazare),  Brian (sister in-law Francine, Aurora), brother in law Steve (Rosemere) and his many nieces and nephews.  Known fondly as "Grumps" by his seven grandchildren, Dennis will be forever in the hearts of and lovingly remembered by Courtney, Brendon, Emily, Celine, Jenna May, Parker, Dylan and two step-grandchildren Sophie and Chloe.   Dennis enjoyed spending time with family and friends at sporting events and especially when he was outdoors exploring the many provincial parks in Ontario and their surroundings (With a lofty goal of visiting all of them, to their credit Dennis and Gerry were able to camp at fifty of them with favorites calling them back year after year).
Family and friends are invited to gather for a visitation at the Lynn-Stone Funeral Home 15 Yonge St., Elmvale, On. on Thursday, August, 20th , from 19:00-21:00 hrs..  Funeral Service and internment will take place on Friday, August 21st at 10:30hrs. at St. Patrick's Catholic Church 1600 Flos Rd 4, Phelpston,  followed by a reception at our Lady of Lourdes Reception Hall at 106 Yonge St N, Elmvale.
In lieu of flowers should you wish to make a memorial donation our family would like support given to the Hospice Simcoe located at 336 Penetanguishene Road, Barrie, Ontario L4M 7C2 where excellent care, compassion and respect was provided to both Dennis and his family during his stay. 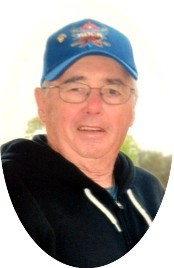