It is with heavy hearts the family of beloved Frederick Frank Harpell announce his peaceful passing on Thursday December 31,2020 at the age of 86.

He is survived by his sister Chrystal Duncan and his sister-in-law Faye Harpell. Predeceased by his father and mother, Captain Frank Harpell and Mrs. Algua Harpell, brother Doug, sister Joan Cameron(Don) and brother-in-law Russell Duncan.

He will be fondly remembered for his beautiful smile, sense of humour, singing Elvis songs and playing guitar around the campfire by his many nieces, nephews and extended family who were such a significant part of his life.

Fred was born in Midland, Ontario and grew up on Midland Avenue. He had many adventures with his friends exploring Georgian Bay and riding his motorcycle with the Huronia Ramblers which he immortalized in one of his many poems.

Fred had many interesting jobs throughout his life from working on the Great Lakes Steamships with his Dad and brother, to piloting a float plane for Georgian Bay Airways in Parry Sound to eventually settling in Elmvale and becoming owner of Dutcher and Corbett Insurance until his retirement.

He was actively involved in the community of Elmvale serving on Town Council for many years where he held the finance portfolio, was a Lions Club member eventually becoming President and an executive director, he spearheaded the reorganization and inception of the Elmvale Chamber of Commerce, served on the official board of St. John's United Church and chaired or co-chaired many fundraising events. As written in another poem, he said “Do as much good as you can”.

Fred and Evelyn enjoyed 60 wonderful years together. They created many special memories raising their adored children, sharing many adventures with their family and friends, travelling the world, camping, boating, endless renovating then retiring to winters in Arizona and summers at the cottage they built on Gloucester Pool.

A Celebration of Fred’s Life will be held at a later date. 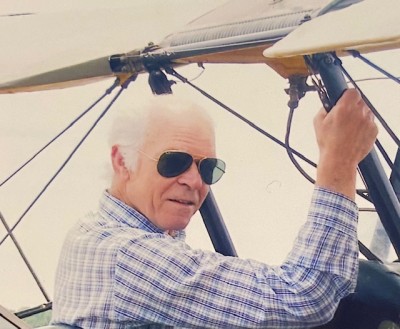