In the early afternoon, on Friday, February 19, 2021, as he was preparing to depart his beloved Elmvale Bakery home for a routine eye checkup with his dear wife Irene of 55 years, Werner Etzinger’s big beautiful heart finally gave in to the forces of the lung condition, COPD, that had ruled his physical being for the final years of his life.

In leaving this life behind, Werner joins his brothers Manfred and Willi, who shaped his spiritual being and values, inspiring him to achieve the things he did and to also laugh at life. And most importantly, to support those around him, especially his sons Michael, Fred, Chris, and Bernd, Werner and Irene’s sons find their own inspiration in life shaped by the hard work, kindness, and devotion that shaped every day of Werner’s life.

Werner joins his parents Karl and Maria (nee Dresel) and is survived by sisters Inge, Charlotte, and brother Adi.  His siblings were recipients of frequent overseas telephone calls that were made possible by a terrific long-distance phone plan that Werner had found. He encouraged all of his boys to get this plan because you could buy time in advance and in bulk.

Werner grew up in poverty in the ravaged world of post-war Austria, where he and his brothers and sisters lived joyfully, celebrating the simplest of things like a chicken for dinner, or indoor plumbing in the home they had fled to following the Soviet occupation of their village. He left home at the age of 13 to begin a life of hard, but rewarding work, first as a barber, and then at 14, as a baker. He worked in small bakeries in some of the most beautiful locations across Austria, including Vienna and the Kleinwalsertal Valley in the province of Voralberg.  These places were the source of so many of the stories that Werner loved to tell and would become wonderful sources of gifts to his family and friends.

One of those gifts was as recent as this Christmas when he went to great lengths in early November to order lebkuchen, a traditional German Christmas gingerbread cake, from Gandl Bakery in St Wolfgang, Austria.  Despite Werner’s fretting, those lebkuchen still arrived in late January, due to COVID-19 postal backlogs. Each type of cake he ordered was a story in itself for Werner. His encyclopedic knowledge covered so many areas far beyond the world of baking, knowing where and why each piece of cake existed and how it was made. Werner was a master of his craft. His son Chris has followed in those footsteps and now blazes his own path in partnership with his wife Carol.

For a better future, and because Canada seemed closer to home than Australia, Werner chose to emigrate to Canada. He convinced his cautious new bride Irene, who was then expecting their second child Chris, that better times lay ahead in this beautiful new country that he had seen in a brochure brought home from the Canadian consulate in Munich.

Irene (Gruber), who herself was orphaned by the age of fifteen, had already worked a lifetime by the time she met and married this charming young Werner. He sent her flowers and letters daily and hitchhiked to her small village in Bavaria’s Upper Palantinate region with the hope that she would choose him to begin a new life. Thinking that new life was to be a cool flat in eastern Munich, Irene had little idea that by saying yes to marriage, she would soon say yes to Canada, and the reality that everything in their lives would change. But they never looked back and they loved their new life in Canada.

Werner had deep friendships. He joins Erich Luisser, his first and one of his two best friends in Canada, a fellow Austrian immigrant, who had also moved to Canada with his beautiful young wife Maria. The four of them together were like a family. Their sons Gary and Rick were like cousins and these two families of all sons were witness to the antics and shenanigans of two young men learning a new language and culture in the rough and tumble world of the Toronto supermarket scene in the early 1970s. Eric and Werner worked with a smorgasbord of other new Canadians in the heated prep rooms of the in-store bakeries that Loblaws and Dominion once had.

After rising quickly to management positions, Werner left that corporate world to open bakeries first in Paris, ON and then Elmvale, ON, both of which became local institutions. However, he would never leave the companionship of the co-workers from those supermarket days, including his other friend and brother-like figure Joe Miller and his wife Marion, whose kindness, companionship, and humour would support Werner and Irene through some of their toughest times.

One of Werner’s great gifts to his family and friends were his stories.  To our great good fortune, he decided to write them down and they were published into a book called Memories. The book was shared with all who were at their 50th wedding anniversary at The Mandarin restaurant, the only buffet Werner thought was worth the money.

That book told the stories of his deep love and admiration for his mother, and the empathy he had even at a very young age. He wrote of the sacrifices she made when raising six children on her own.  She raised them for three years not knowing whether her own husband would be found innocent in a British post-war trial and return, which he was and which he did, because of the testimony of a Jewish witness.

His love of storytelling will be remembered by friends, especially by friends of his sons during their visit to our home in the 80s and 90s. One he loved to tell, was the kindness and goodwill shown to him by strangers in London when he knew no English and got lost. This was a mere 20 years after the end of WWII, and his favourite soccer team, 1860 Munich, made it to the European final at Wembley Stadium. The 2-0 loss to West Ham faded into memory, but his love of the values that would bring Europe together after such a devastating war would be seen every day in his friendships and interests.  He passed that love of politics and peaceful co-existence to his own sons.

Werner’s favourite stories in that book were saved for the immense pride he had in his four sons who, like their father, have taken their own paths in life. He was able to see them excel in the worlds of technology, small business, healthcare, and diplomacy. Werner would remark that diplomacy was in everything and in dealing with everyone. It was that sense of diplomacy that he instilled in each of the boys giving them the foundation to begin their own lives in work and love, with their partners Meaghan (Fred), Nicole (Mike), Carol (Chris), and Marlene (Bernie).

He loved and cherished his grandchildren and his character shines through in each of them -- the fearless and brilliant Alex, the creative and inquiring Hellaina, the courageous and heroic Will, the cerebral and kind Theo, the compassionate and trailblazing Nadia, and finally, little baby Alice and all who may come after her. Each will know the stories of their grandfather or great-grandfather as their parents, cousins, aunts, and uncles, and most especially Irene, the world’s greatest Oma, will point to the pictures on the wall and tell them of this special, loving man known to all as Opa.

Our family started with the marriage of Irene and Werner on a chilly March day in 1966 in a small church in Pasing, a neighbourhood in Munich. His brother Willi and his wife Helga were present at their side, along with their daughter and lifelong Werner superfan Sabine, who was flower-girl that day. (Her birthday was always a special day on his calendar, and this year it was going to be flowers.)

Fifty-five years later, for Irene’s birthday, Werner had bought flowers once again. Because he liked to be early and couldn’t keep a secret anyway, the flowers arrived a week in advance - always meant to be a surprise and never really surprising Irene, the one person who knew him so well. Werner would always say that without Irene, the love of his life, his life just wouldn’t have turned out. In the end, it was her love that meant everything to him and he always said he was the luckiest man in the world because of it.

He has now departed his Elmvale home, but his spirit lives on with all of us. A private family service is on Tuesday, February 23 in accordance with Covid restrictions. Once restrictions ease, there will be a celebration of life.

In lieu of flowers, please send donations to The Royal Victoria Hospital Barrie, ON. 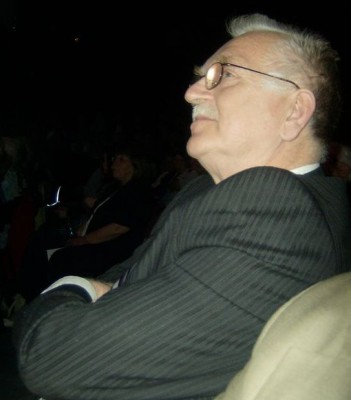