Bob passed away suddenly at Georgian Bay District Hospital on April 28th in his 87th year.
Uncle Bob was born Sept 4, 1934 in Aurora, Ontario to Fred & Dorothy (Linton) Chapman and was the younger brother to Donald who was just a year older.

When the 2nd world war broke out, they moved to the 4th line of Tiny Township to live with their grandparents at the Linton property, while their Dad served on the east coast as a cook. When their Dad returned from the war, they bought a house on William St. in Midland, ON. In the early 1950's both parents worked on the Great Lake freighters as 1st and 2nd Cook and his brother Don was working there as well. It only made sense that Bob made the transition to the Great Lakes upon leaving high school which was not really working out well for him. Over the next 30 years, Bob worked as an engineer on approx. 20 different Freighters on the Great Lakes and upon leaving there spent a couple of years as engineer on the RMS Segwun out of Gravenhurst.

Bob had a trailer at Smith's trailer camp for years, so he had a place to stay during the winter months but as soon as the first freighter hit town he was gone until the lakes froze up. He would visit his brother's farm whenever the ship docked in Midland. In 1994 Bob purchased his Elizabeth Street home and moved there.

After 32 years on the lakes, it was time to get onto dry land but finding a job as a stationary engineer was a challenge. As such, Bob returned to school and got his Grade 12 diploma and then attended George Brown College to get his stationary license/degree. He then found employment at Bay Mills as a Stationary engineer where he worked up until he retired.

Bob never married and had no children of his own but was a common fixture at his brother Don's where he pretty much adopted those kids as his own and their families as his. He was never absent from any event that was held when he was able to come.

Bob was an avid participant of Waverley Gospel Hall for most of his adult life. He was always the 1st to arrive after he retired to shovel snow, unlock doors, and prepare for the service. Bob made the decision to accept Christ while in his 20's and living with Don & Violet during the winter months. It changed Bob's lifestyle completely and although he was still creating some crazy stories, his brother Don would say, "You should have seen him before he found the Lord."

Bob had some crazy moments in life and just about everyone has a "Bob Story" to share; but everyone would also agree that he had a generous heart and loved to help others as best he could regardless of who they were. We will miss Bob, but we know he's in heaven with his Lord and Savior and reunited with his brother Don, absent from the body but present with the Lord.

Special thanks to his Elizabeth Street neighbor Rick Story who quietly watched over him the past few years, helping out by blowing snow and making contact with us if we needed to get in and check on him.

In Memoriam donations can be made to "Waverley Gospel Hall" if you wish. 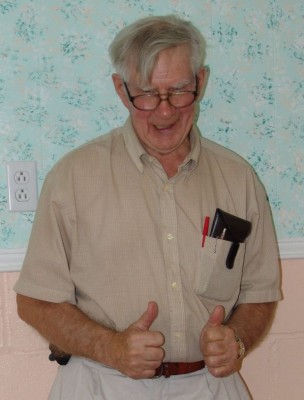