Guy was born and raised in Lafontaine to Lucien and Adele Maurice.  He began his working life alongside his father in his International Harvester tractor dealership, fixing and servicing tractors on local farms.  After sailing on the S.S. Keewatin, he attended business college and then worked as a bookkeeper for Dominion Food Stores.  He then spent a lifetime in public service at all levels of government – federal, provincial and municipal, including 27 years as the Chief Administrative Officer for the Township of Tiny.

He also served the members of his community as the volunteer Fire Chief for the Township of Tiny, as the Chair of the Board of Directors for the Penetanguishene General Hospital, and a member of the Board of Directors for the Mental Health Centre in Penetanguishene (now known as Waypoint Centre for Mental Health Care).  Never one to sit still, he managed to find time to own and operate Wyevale Sunoco for several years.

In 1991 he was appointed as a Justice of the Peace for the province of Ontario, retiring in 2010.  As a Justice of the Peace, Guy presided in courts across the province, in both French and English. He joyfully officiated at hundreds of wedding ceremonies, including the weddings of 3 of his grandchildren.  When he was sworn in, his family was advised that he was to be addressed as His Worship.  This was not a stretch, as we already worshipped him.

Guy will be remembered by his family as kind, loving, tenacious and determined.  He was dedicated to his family and his collection of 7 antique International tractors that he dragged home and lovingly restored.  His fleet of tractors was a great source of pride and they became a fixture in the annual Elmvale Fall Fair Parade, driven by his sons and grandchildren.  In his spare time, he fixed tractors, cut the grass and cheered for the Montreal Canadiens.

Guy was a man of many talents.  He could type 120 words a minute; rock any baby to sleep; and was a great dancer.  It was a pleasure to watch him and Roslande float across a dance floor in perfect unison – a reflection of their life together.

Guy lived out the last few years of his life on the Willow wing of the Georgian Manor in Penetanguishene.  Our family will be forever grateful to the exceptional, dedicated and compassionate care that he received from Dr. Kyle Lee and all of the incredibly kind and devoted staff at the Georgian Manor who cared for him as they would care for their own family.  A special thank you to Cora, Annette, Rahill, Denise, May, Andrew, Annie, Dylan, Brent, Dorothy, Shawn, Michelle, and Stephen.

Cremation has taken place, and with restrictions currently in place, a private family gathering to honour his legacy is planned.   In lieu of flowers, donations to the Diabetes Canada would be appreciated. 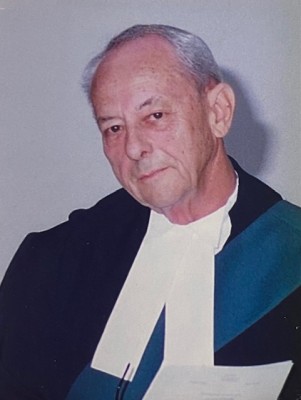