Died peacefully, after a short battle with illness, at Matthew’s House Hospice in Alliston with family at his side. Predeceased by his wife Joyce Elizabeth Neabel. Dear father to Larry Pulfer (Heather) from BC, Heather Pulfer (Mike) from Alliston and Wendy Marinzel (Wally) from Little Britain. Proud Grandfather to 6 grandsons, Sean Spilsbury (Kassy), James Spilsbury (Carli), Duncan Spilsbury, Dane Hoare (Kayla), Cole Hoare (Jasmine) and Jason Pulfer (Janina). Dear friend of Mike McLeod (Sylvia). Don was a graduate of Leaside High School. He graduated from University of Toronto in 1960 in Applied Science, Professional Electrical Engineer designation 1961. He worked for Bell Canada before transitioning to his true love of teaching. He spent 34 years as a teacher and Vice Principal with the Scarborough Board of Education. He was an avid sports enthusiast and he not only played hockey and football but spent many years coaching hockey and fastball in the Scarborough area. He had a passion for golf which he took up almost full time when he retired to Wasaga Beach with his wife Joyce. He was an avid woodworker and slow pitch player in the Wasaga Beach community. He was a long standing member of the Marlwood Golf Club where he managed to shoot two separate “hole-in-ones” over the years of playing the course. Don was a Brother of the Northern Lights Masonic Lodge of Stayner and a Noble of the Manitou Shrine Club of Collingwood where he spend countless hours selling fruitcakes and shortbread for Christmas each year along with working the Shrine Bingo Nights on Wednesdays. He loved to play poker with his group of guys. Yearly wintering in either Myrtle Beach or Florida was always a priority even up to November 2021 when Don made his final trip south. He loved to travel with Joyce when she was alive and they would fondly visit Larry and Heather in BC to spend time with them and their grandson Jason. He would always fit a golf game in while out there not to mention a trip to the casino to try his luck out as he would always say sometimes they would “lend him some money and sometimes they would take some money for safekeeping”.

Don’s greatest accomplishments in life were not only his children but his grandchildren, who he spent many years teaching valuable life skills that would see them grown into fine young men.

Cremation has taken place and there will be no service but the children of Donald have advised that there will be a Celebration of his Life at a later date, when the grass has sprung and the golf course is green.

In lieu of flowers the family would appreciate memorial donations in Don’s name go to Matthews House Hospice in Alliston, or The Shriners Children's Hospital (which primary goal is to raise funds for the Shriners Children’s Hospitals which provides no-questions-asked free specialized healthcare for children in need.) Donations may be made directly online. Please notify lynnstone@sympatico.ca of donor name/address so that the family can be notified. 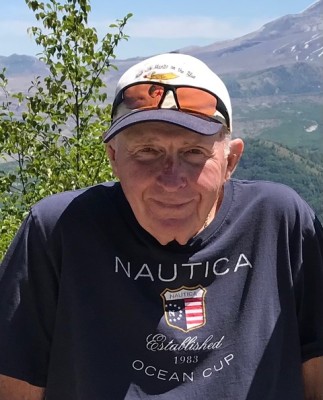