Passed away peacefully at Georgian Bay General Hospital, Midland on Sunday, February 27, 2022 in his 81st year. Russ Ritchie of Elmvale, beloved husband of the late Lynda Ritchie (nee Lees), cherished father of Tim (Beverly) and Jen. Lovingly remembered by his sister Dollie Moulden and the extended Ritchie and Lees families. Predeceased by his parents Herb and Nellie Ritchie and his siblings Barb Newton, Stan (survived by Jackie), Grant (survived by Dianne), Jack, Harry, Allan, Ross and Isabelle Archer. Russ will be fondly remembered by many relatives, friends and neighbours.

As Russ would tell you, he “was born in a snow bank on a hill”. He proudly drove gas truck for much of his life. When not on the road, he also worked hard in tree removal, as a handyman, and with the volunteer fire department. Many remember him as feisty hockey player who often got mistaken as his brother -off the ice. Russ carried little treats in his pockets for any canine friends he might happen upon, and was teased that because of that he might just be the town ‘pack leader’. He enjoyed many hours at the coffee shop sharing stories with his dear friends there. Russ was a community minded man, always lending a hand when he could, and he and Lynda were always happy to share their fresh garden produce with friends and neighbours. Russ was a gentleman with a great sense of humour, always a kind word, a joke, and a smile.

Visitation will be held on Friday, March 4th at Lynn-Stone Funeral Home, Elmvale, from 3 to 6 pm.

A graveside memorial service will be held at a later date.

If you wish to make a memorial donation in his name please consider donating directly to Hospice Simcoe. 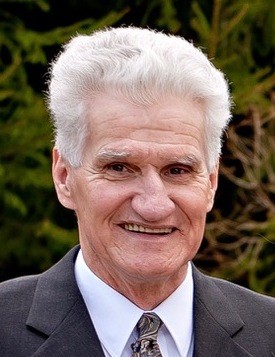