Passed away peacefully at Woods Park Care Centre, Barrie, on Friday, April 22, 2016 in her 90th year. Dear wife for 65 years of Bruce Mayers. Much loved mother of Trent Mayers (Susan Carr) of Barrie and Daryl Mayers (Kimberley Stefaniuk) of Toronto. Irene will be lovingly remembered by her brothers and sisters Willie, Eric, and Mary of Northern Ireland and Marjorie and Gretta of England. She was predeceased by her siblings Wesley, Edmund, Olive, and Emma.  She will be missed by many nieces, nephews, and brothers and sisters-in-law.

Irene was born to Joseph and Marjory Watson (nee McKenzie) in Ballyreagh, County Fermanagh, Northern Ireland, growing up through the events of the Great Depression and the Second World War.  In 1950, she and Bruce boarded the RMS Samaria bound for Quebec City in Canada. From there they travelled by train to their first home in Ingersoll, sponsored as immigrants by Bruce’s much loved Uncle and Aunt, Sam and Violet Wadsworth.  Irene and Bruce first worked for Ingersoll Cheese Factory, but Irene then found happiness working in Loblaws in Ingersoll.  From there they moved to Woodstock, when Bruce became Foreman for the Oxford Dairy and Irene worked raising her 2 young boys.  In 1965, Irene and Bruce realized the dream of owning their own business and moved to Cookstown where they owned and operated Mayers’ Lucky Dollar for 20 years, which was a typical village grocery and hardware store.  Finally, they built a retirement home in Orr Lake and moved there to enjoy a well deserved retirement in 1984. Irene enjoyed many years as an active member of the United Church in Ingersoll, Woodstock, Cookstown and Elmvale and was always ready to lend a helping hand.

Irene’s family would especially like to thank the staff and volunteers at Woods Park Care Centre for making the last few years happy and enjoyable.

Friends may call at the Lynn-Stone Funeral Home, Elmvale, on Wednesday, April 27th from 2-4 & 7-9 pm and on Thursday from 10 am until time of the service at 11 am; reception to follow.

If lieu of flowers, memorial donations to Alzheimer Society for research or a charity of your choice would be appreciated by the family. 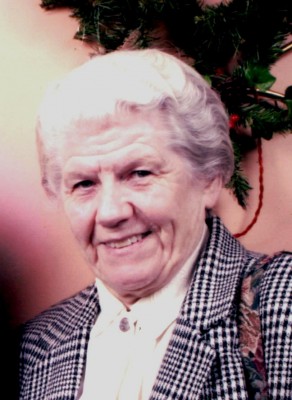