It is with great sadness that we announce the passing of Ross Heacock, cherished husband, father, and grandpa. Ross passed peacefully at home on July 25, 2016 after a courageous fight against prostate cancer.
Ross was a devoted husband of 28 years to Becky, loving father to Tim and his wife Laura, and Roslyn and her husband Paul, and fun-loving grandpa to Maddy, Parker and Charlotte. He is also remembered by his brother John, sister-in-law Terri and their children Kevin and Aaron, and his brother Charles.
Ross was an accomplished lawyer who was passionately committed to serving his clients and the community of Midland, Ontario for over 48 years.
Born in Collingwood and raised in Elmvale, Ross was deeply connected to his heritage and the beauty of Simcoe County, which enabled him to establish a widespread network of lifelong friendships.
An avid sports enthusiast and loyal fan to all Canadian athletes, Ross enjoyed being an active member of the Midland Golf & Country Club as well as spending winters on the ice playing hockey for the Midland Saints Oldtimers Hockey Club.

Throughout his battle with cancer, Ross whole-heartedly appreciated the care and support that he received from family, friends, care workers and the community. We would like to thank Dr. Richard Thomas, Reverend Mark Wolfe and the congregation of First Penetanguishine Presbyterian Church for their generous and continued efforts.

To honour Ross's wishes, a private service will be held for immediate family in celebration of his life. Donations to Royal Victoria Hospital's Simcoe Muskoka Regional Cancer Centre and Georgian Bay General Hospital Foundation would be welcomed and appreciated. 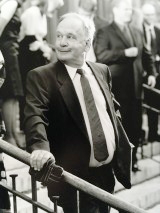