Passed away peacefully on January 10, 2022, in her 101st year, surrounded by the love of her family.

From her birth on April 14, 1921 in Cobalt, ON to Inez and Arnold Smith, Eleanor’s life was defined by her signature wit and resilience. Both were on display when she celebrated her 8th birthday by secretly learning to walk after a long battle with polio, surprising her parents at the dinner table. Both were again called into service when her father died in 1932, thrusting 11-year-old Eleanor and her brothers, Alan and Donald, into a new way of life while their mother returned to teaching. Eleanor went on to study occupational therapy at the University of Toronto; after graduating in 1942, she worked first in Woodstock ON and then overseas as part of the WWII effort. A happy occasion preceded more devastation during this period: she married her beloved Jim in 1945, and then faced the sudden death of their first son, Jamie, in 1949.

Eleanor and Jim persevered, eventually raising eight children and establishing a successful farm near Elmvale ON. In the 1980s, they retired to a custom-built house in the farm’s old orchard. That house became a social hub for family and a sanctuary for Eleanor, especially after Jim passed away in 2000. Thanks to the loving care and vigilance of her son Tom and his siblings, as well as the carers and nurses from Home Instead and Bayshore Home Care, Eleanor was able to stay in that sanctuary until she died—her final act of resilience.

Eleanor’s love for her family, her remarkable intelligence, and her famously dry sense of humour will be forever missed by her children, Margaret; Susan (Archdeacon Jim Sandilands); David (Padma); Mary; Helen (Brad Thompson); Tom (Colleen); Ted (Jane); and Catharine. Fourteen grandchildren and seven great-grandchildren also treasure her memory, as well as her countless neighbours and friends.

A celebration of Eleanor’s life will take place in Elmvale later this year, followed by interment of ashes in Bowmanville Cemetery.

In lieu of flowers, please consider a memorial donation to Amnesty International or St. John’s United Church in Elmvale. 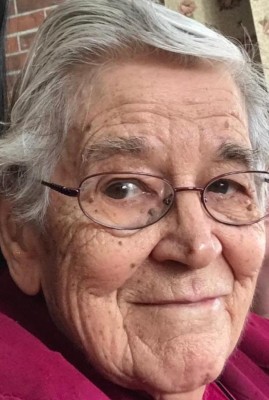