It is with great sadness that we announce the passing of our beloved mother, Frances Moran. She was born Frances MacDonald, eldest child of Bill and Mercedes MacDonald, on September 30, 1929. Mom is survived by her sisters Shirley (late Verle) Priest and Ursula (Grant Davidson).  She was predeceased by her siblings, Mary O’Neill, Irene (late George) MacDonald, Joe (MaryLou) MacDonald, Chris (Brenda) MacDonald, Marg Russell, Sadie (late Doug) Bannerman, and Basil (Cheryl Jorgensen), Wilfred, William, and Paul. She is remembered by her loving sister-in-law Bernadette Reynolds.

Mother was very close with her family, leaving school at an early age to help at home with the care of the large family. In her late teens she moved to Barrie to work and shared an apartment with her sister and best friend, Irene. The two remained close throughout their lives talking every day on the phone and visiting often. Our two families spent many special times together throughout the years.

Mother was an avid reader and letter writer. She had beautiful penmanship that she instilled in her children, and used to write lovely letters to family and friends who lived afar. She believed in the importance of family and made sure that she stayed connected with those near and dear.

In 1955 Mother married the love of her life, Gerard Moran. Together they farmed the Moran family farm at Apto and raised their family there, where they taught us the value of hard work, the importance of family, the importance of being a contributing community member and the importance of faith and service to your church. Mother was a proud member and one time president of the St. Patrick’s CWL for over 65 years. While on the farm, they added to the family with Theresa, Rosanne, Peter, Gregory and Robin Eugene.  Gregory passed away in 1967 and Robin in 1969.   Mother was a warm and welcoming host and was never short of baked goods to serve to family and company. Her tarts, brownies, pies, date squares, and carrot cakes were legendary in the family.

In 1988, Mom and Dad built a house and moved to Elmvale where they enjoyed many years of retirement. They enjoyed their time as members of the Sunshine Club and the Legion. They always had a deck of cards at the ready and Mom was known to have a deck in her purse and sometimes even a travel sized cribbage board!

We remain forever grateful for the memories, love, humour, and kindness Mother instilled in her children, grandchildren and great-grandchildren.  She is very much missed by her daughters, Theresa and her husband Murray Greer, their son Kevin and his wife Catherine and their sons Declan and Landon; Rosanne and her husband Brian Gallinger and their son, Gregory; and her son, Peter and his wife Kathy (nee Hubbard) and their daughters Kenzie and Alexa; and the memory of her late sons Gregory and Robin and her late grand-daughter Katelyn.

Our thanks and appreciation to the Staff at the Sara Vista Nursing Home in Elmvale for their care and kindness to our Mother during her time there.

In lieu of flowers, donations made directly to St. Patrick’s Church, 1600 Flos Rd. 4 W, Phelpston, ON L0L2K0 or the Elmvale Legion Br. 262, 7 John St., Elmvale, ON L0L1P0, would be appreciated. Please notify via email, lynnstone@sympatico.ca of your donation (donor name/address) so that the family can be notified. 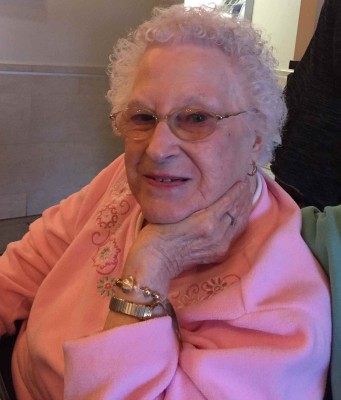